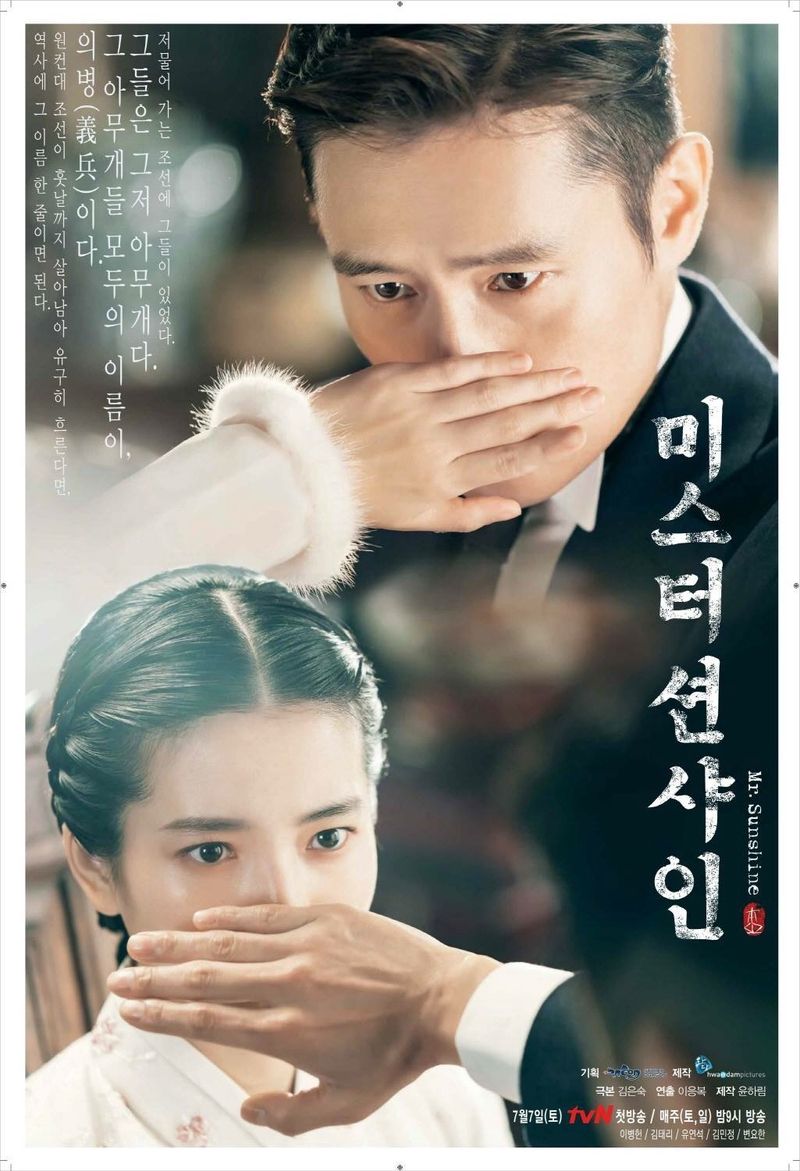 Choi Yoo Jin (Lee Byung Hun) escapes Korea after his parents are killed by their yangban owners and travels to America. There under the name Eugene Choi he becomes a U.S Navy Captain. Under orders he travels back to Korea there he meets a noble man’s granddaughter, Go Ae Sin (Kim Tae Ri) who secretly fights for the independence of Joseon. During these turbulent times they fall in love.

Ae Sin: “Yesterday seemed like a distant past, today felt unfamiliar, and tomorrow was terrifying. It was a time of turbulence. All of us, each in their own way, were living through the rapidly changing Joseon.” 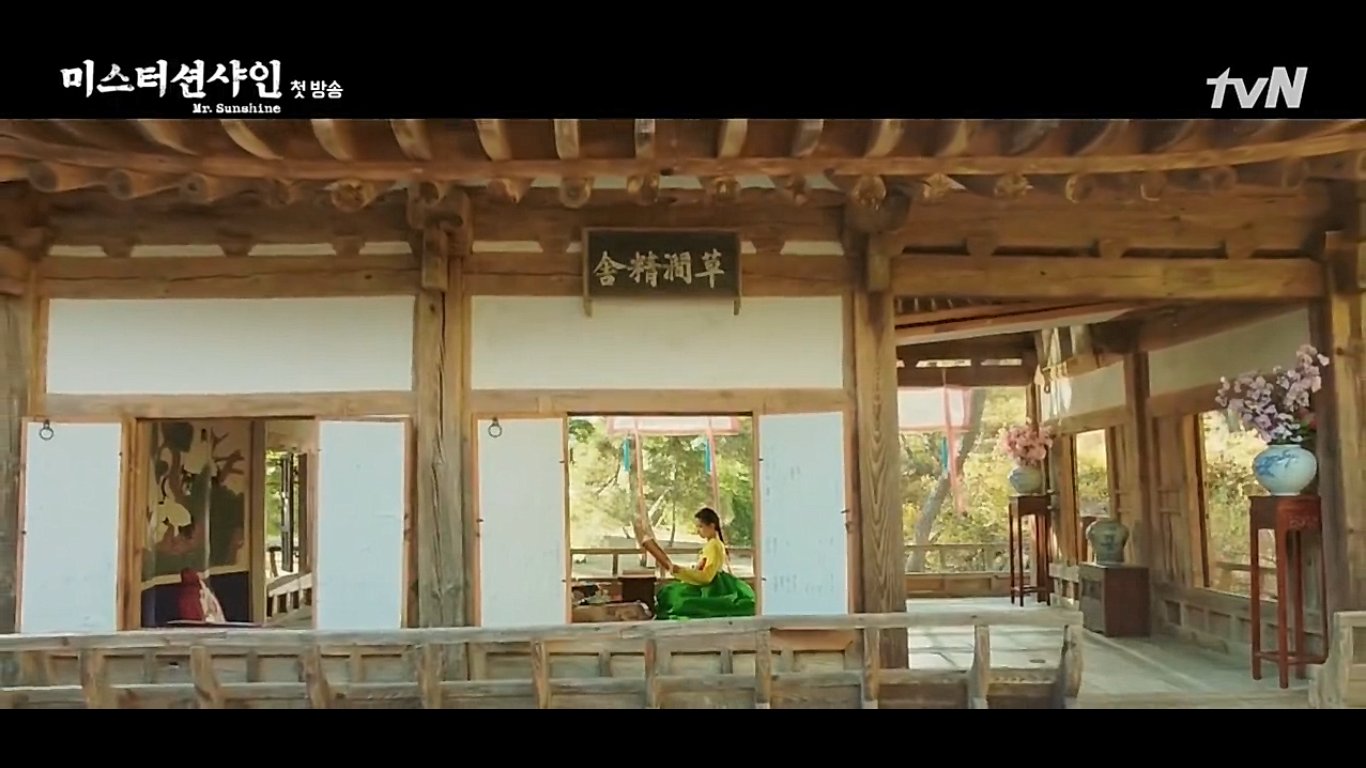 Firstly, I love Mr. Sunshine. The history, characters, backgrounds, scenery, music, everything matches each other and blends to make a perfect story. You might have noticed that I didn’t rave about the casting yet. As it happens I was extremely hesitant about even starting Mr. Sunshine as it stars Lee Byung Hun as the male lead and he happens to be the only Korean male actor that I can’t stand. Also, this drama is from the writer of Goblin which I found depressing. Still, this drama has me crazed. 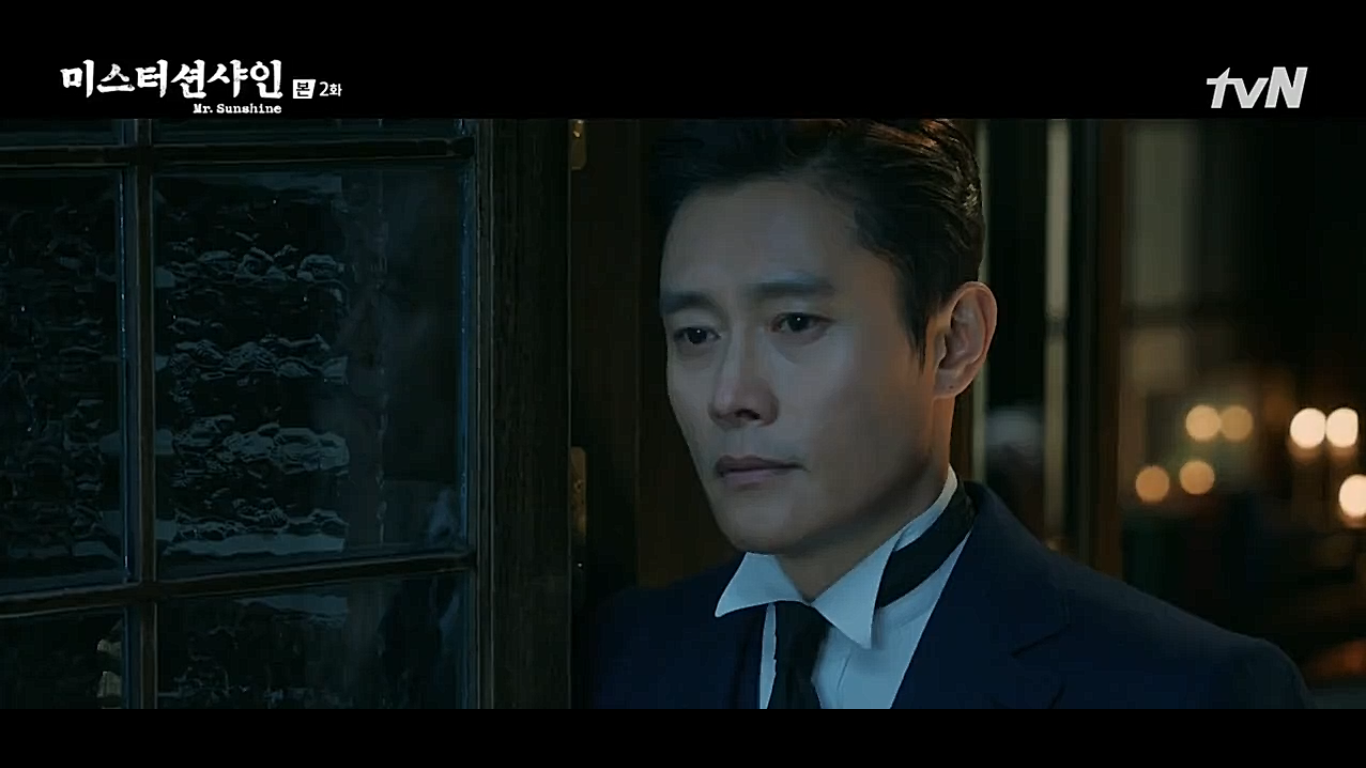 Eugene has only sad memories from Joseon. It’s society was never kind to him or his family and in the end that is what got his parents killed. He managed to escape but life in America wasn’t always easier. 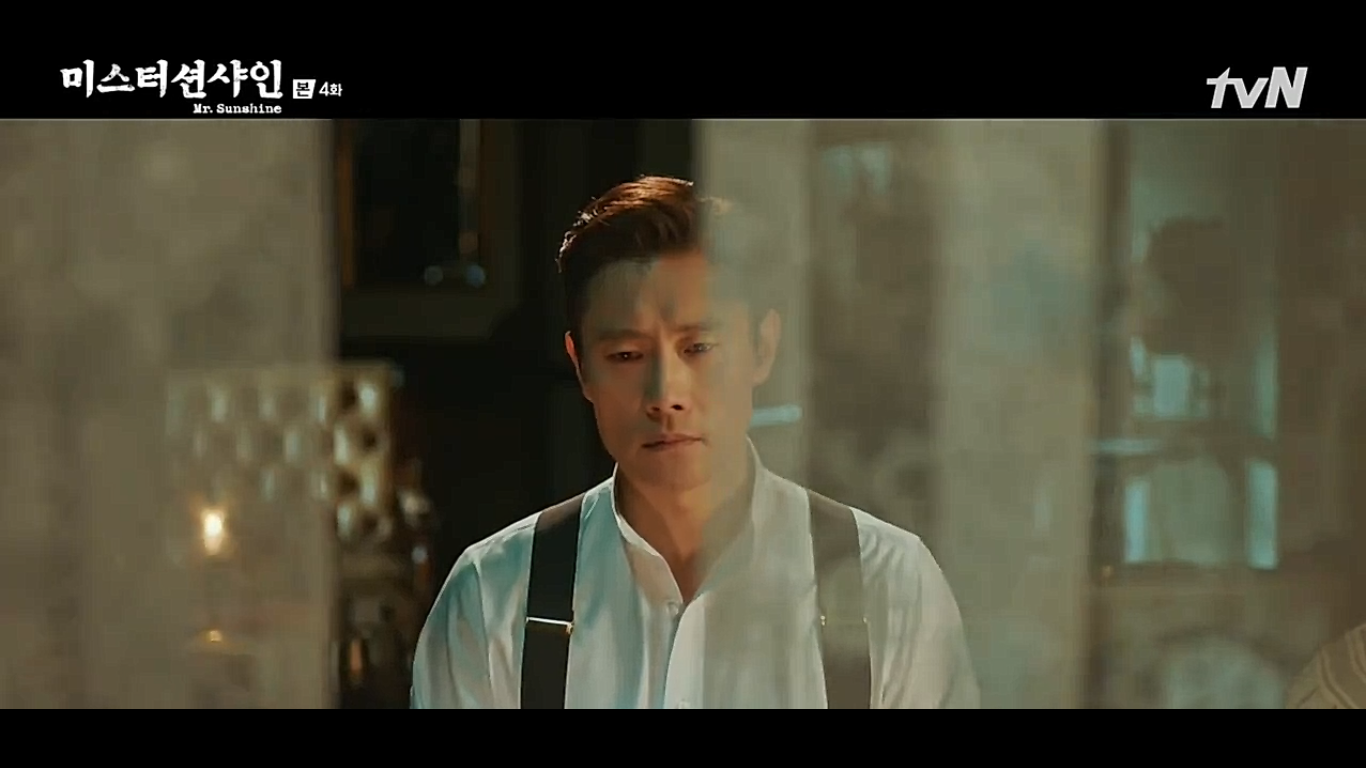 He became a hard-working American: He enlisted in the military and moved up in the ranks. Now as a Captain he is assigned to Joseon. He is silent and brooding, but intelligent. He also has a thirst for revenge. 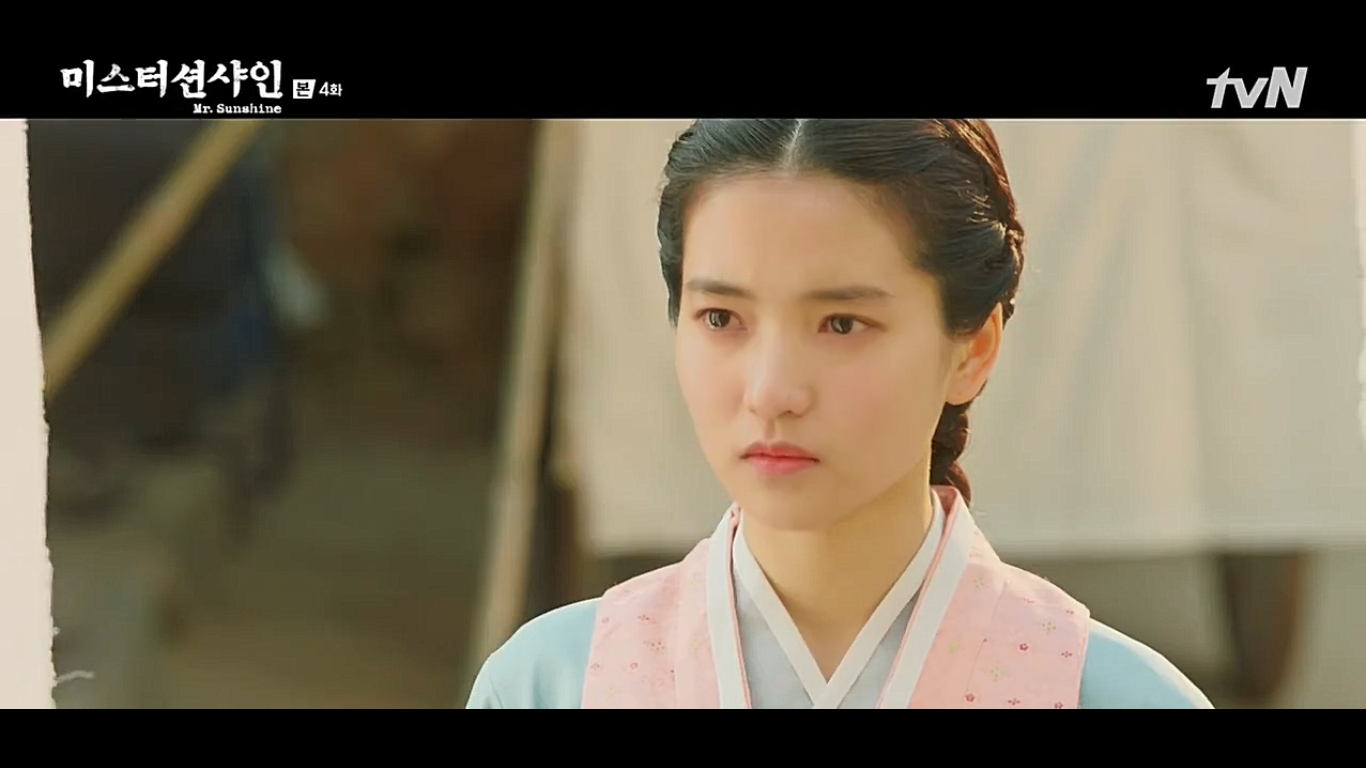 Go Ae Sin is the “sheltered” daughter of a prestigious noble family. In reality she is an intelligent woman whose brain challenges the male dominated society of Joseon.

Ae Shin; “Words have no power. I will fight with a gun.” 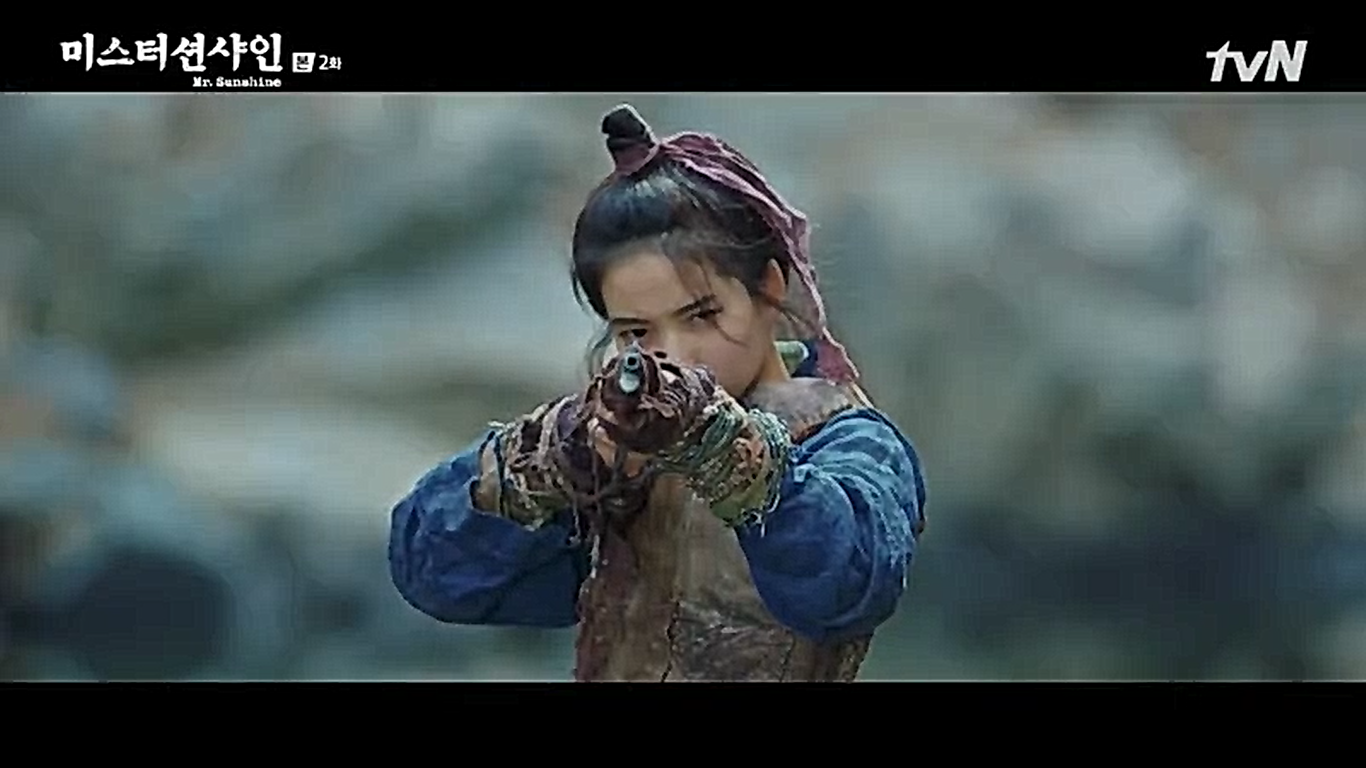 Her parents died when she was just born as freedom fighters of Joseon. She has decided to follow in their footsteps and learns to how to defend herself and fight for her country. 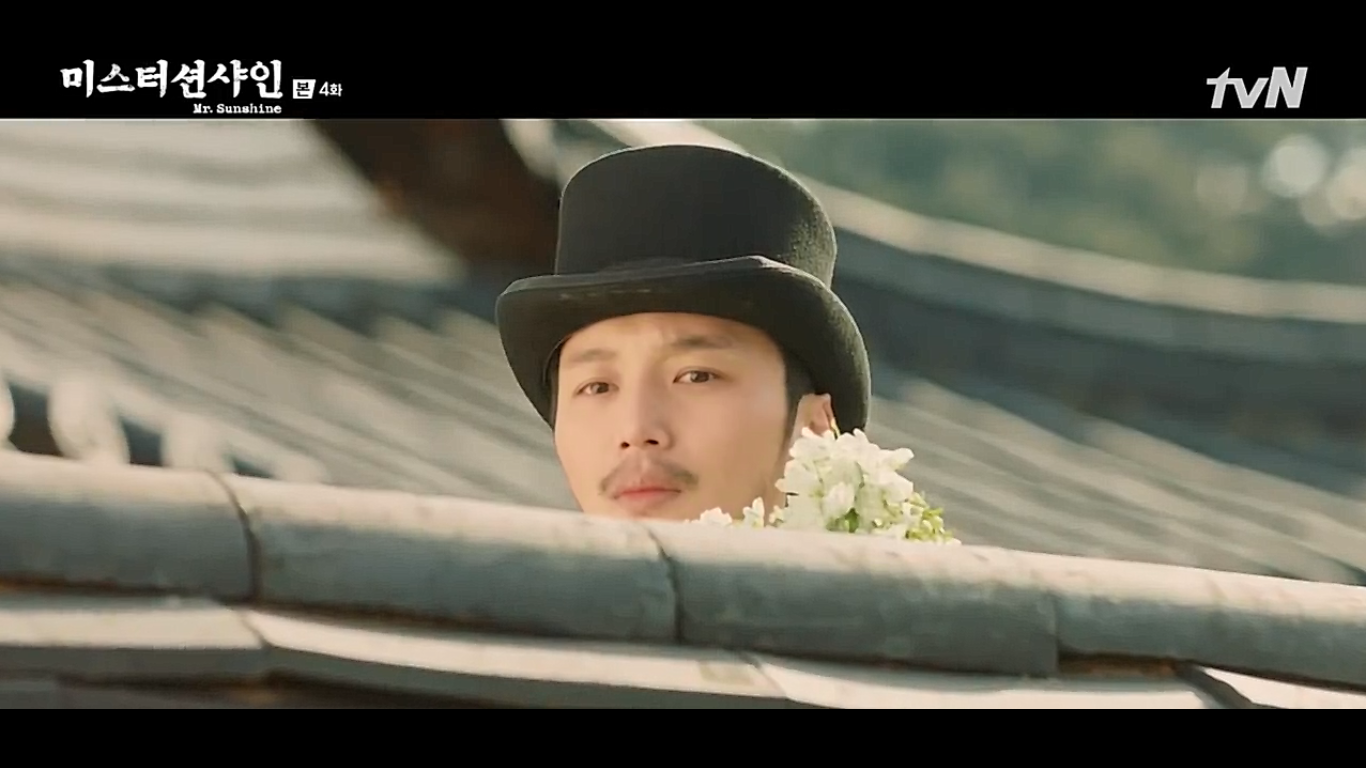 Ae Sin also has a fiancée (Byun Yo Han) who is away in Japan studying. He is the son of the same noble family who Eugene’s parents used to serve. 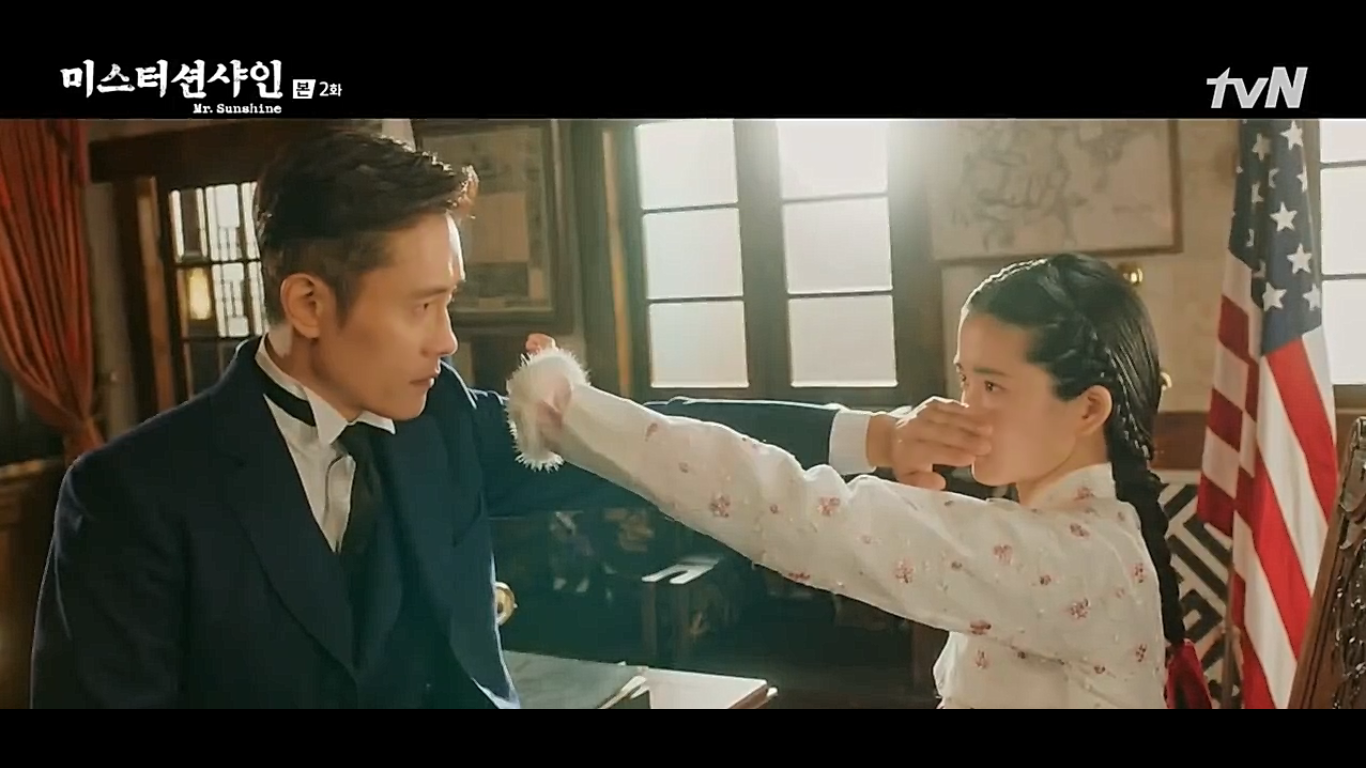 Eugene and Ae Sin first meet while trying to assassinate the same man. They continue to meet as Eugene is assigned to solve the murder of an American who resided in Joseon. Ae Sin questions his motives and goals in Joseon but can’t stop thinking about him. Eugene decides to protect her. Are they comrades in arms or enemies with the same goal? 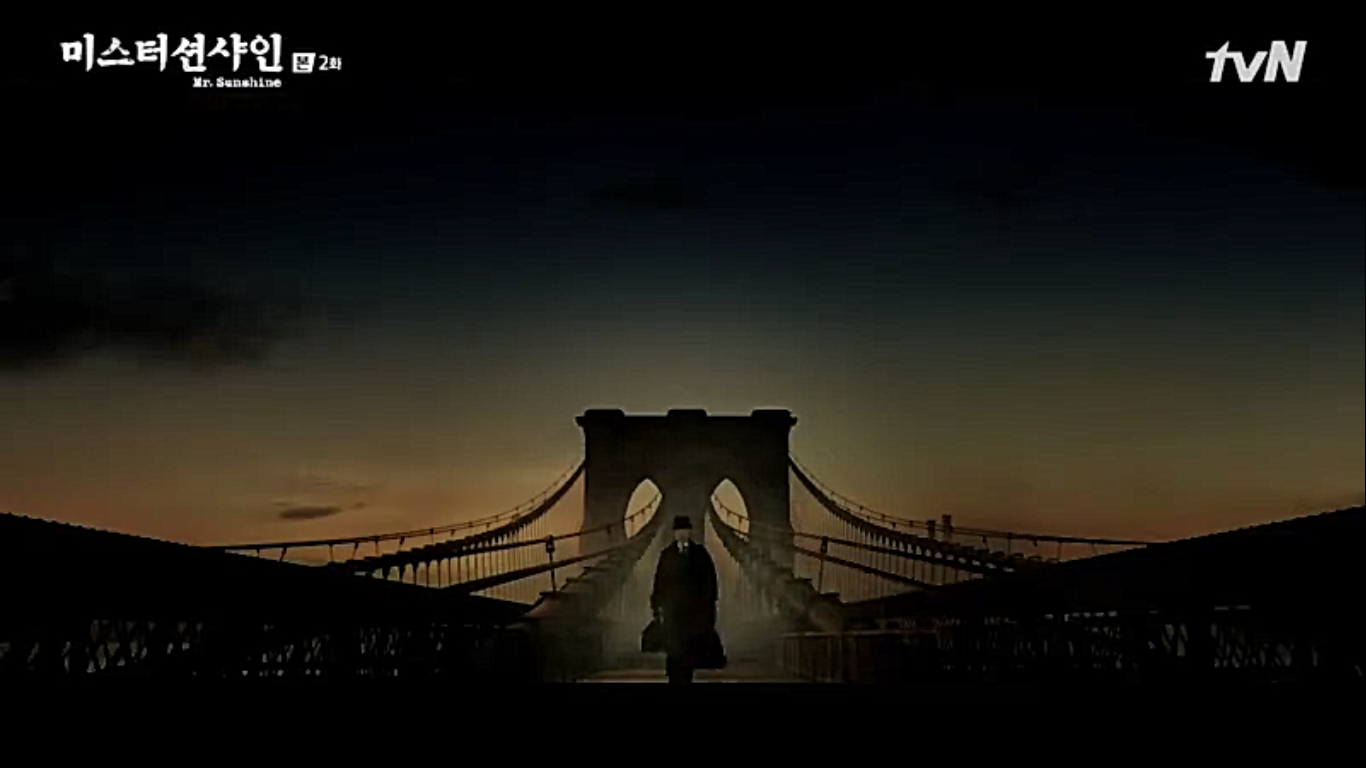 Mr. Sunshine doesn’t only have interesting historical setting (which I talk about more in my Bits and Pieces of History posts for this drama) but it also introduces other captivating characters. 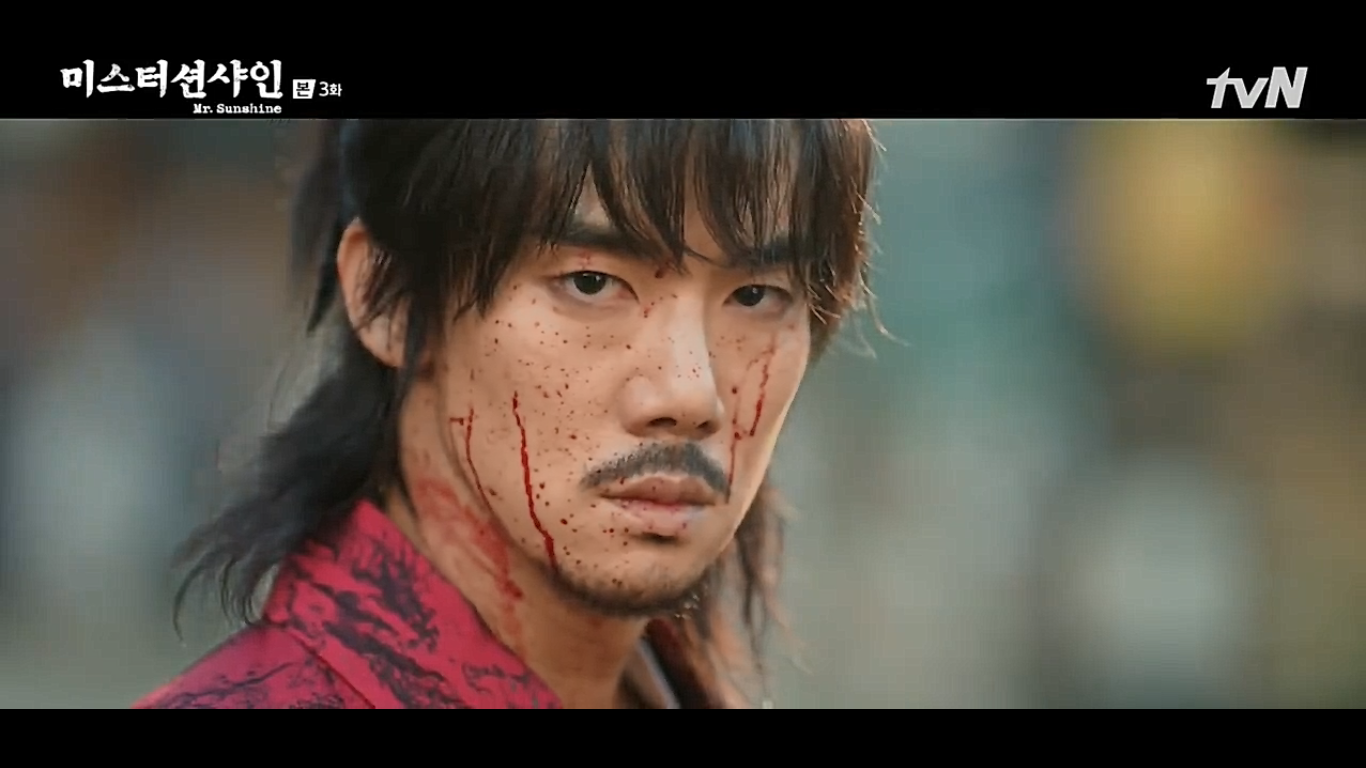 Joseon wasn’t easy on Gu Dong Mae (Yoo Yeon Seok) either. His parents were butchers and of the lowest class in Joseon. Much like Eugene’s parents, they were killed but he escaped with help from Ae Sin. 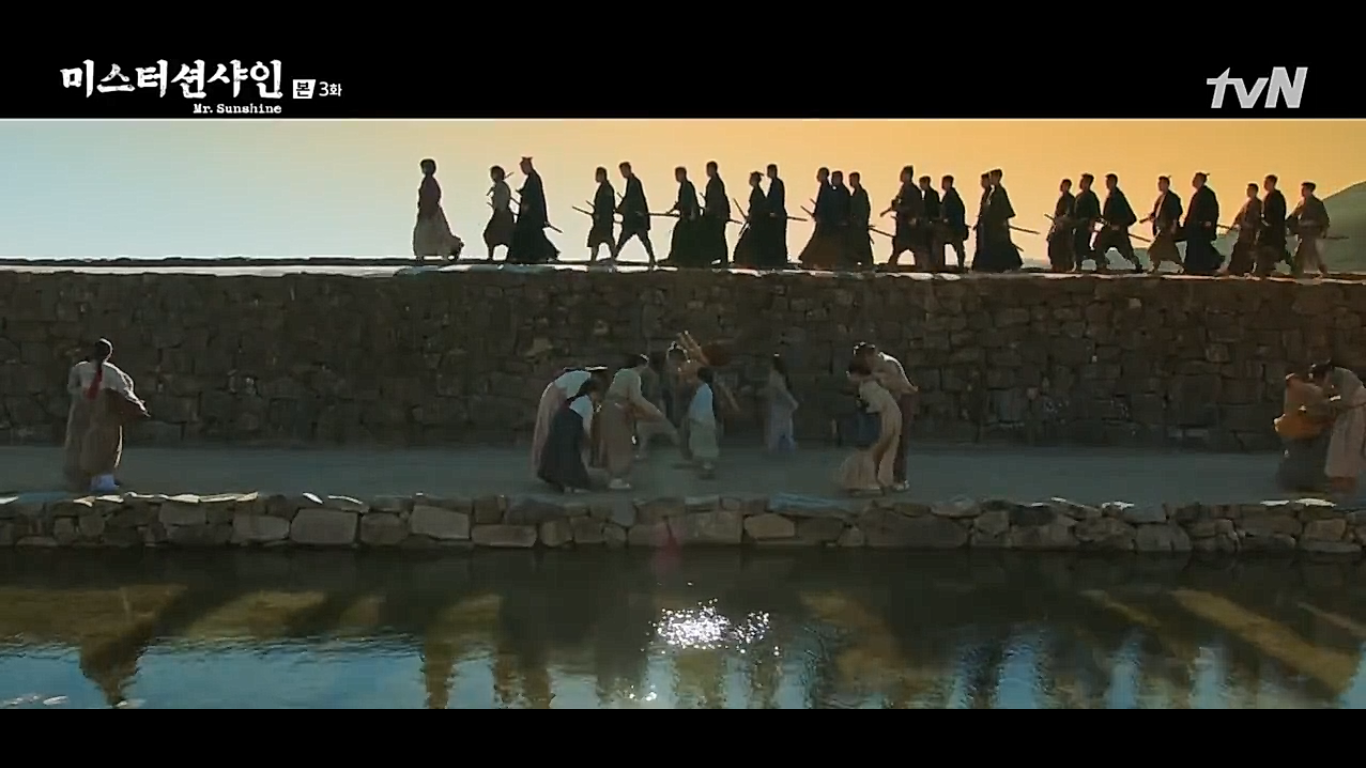 He travelled to Japan and became a powerful gang leader. After returning to Joseon he strikes fear into the hearts of nobles and commoners alike. 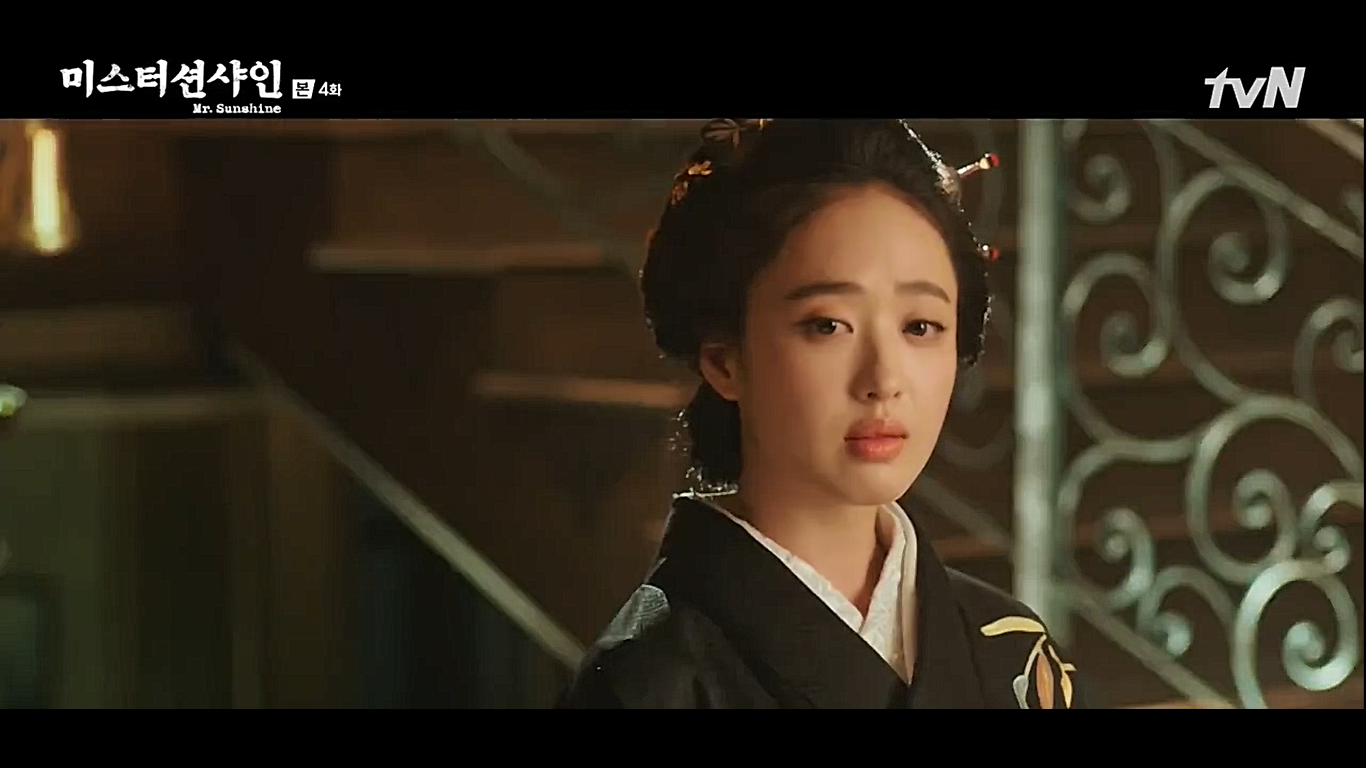 Kudo Hina (Kim Min Jung) is the owner of Glory Hotel where people flock from all around the world. 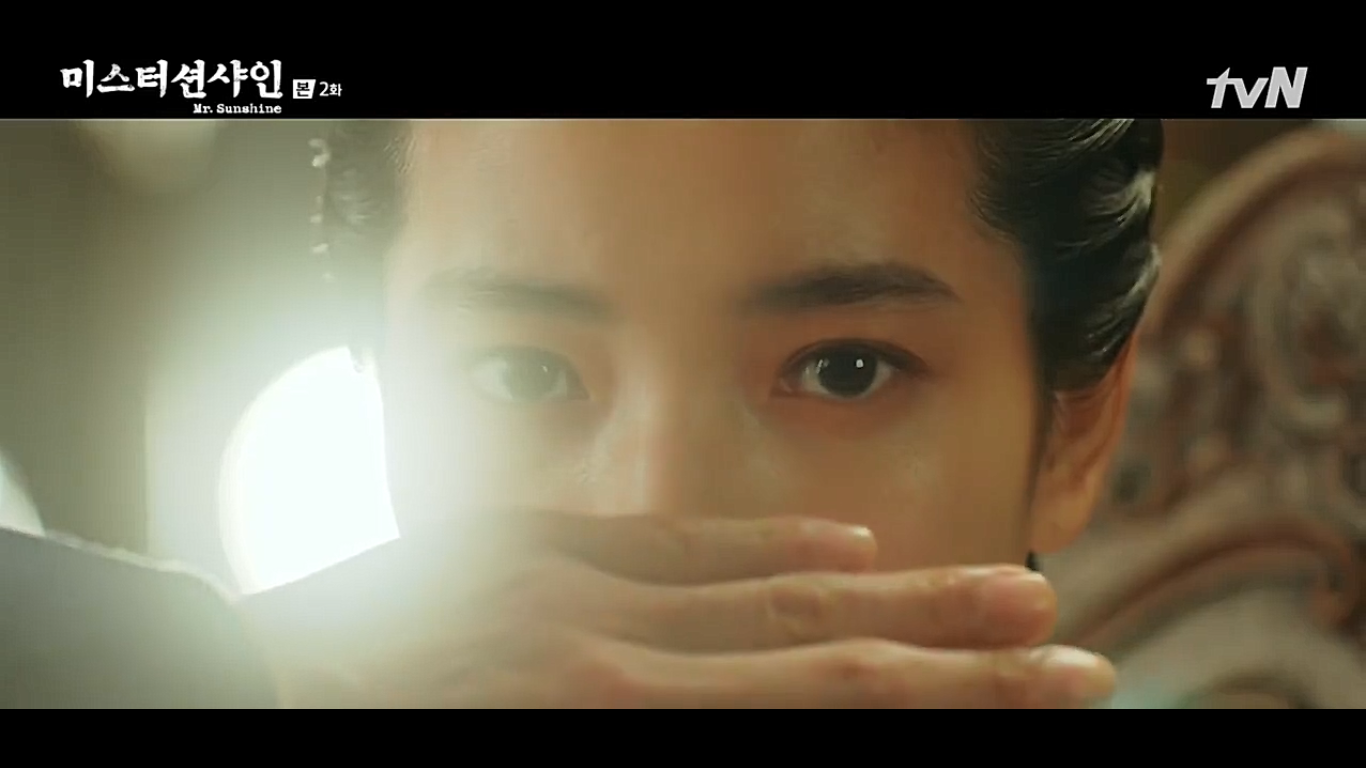 Mr. Sunshine gives background to each its characters. Their stories are staggering and work themselves into the bigger plot flawlessly. 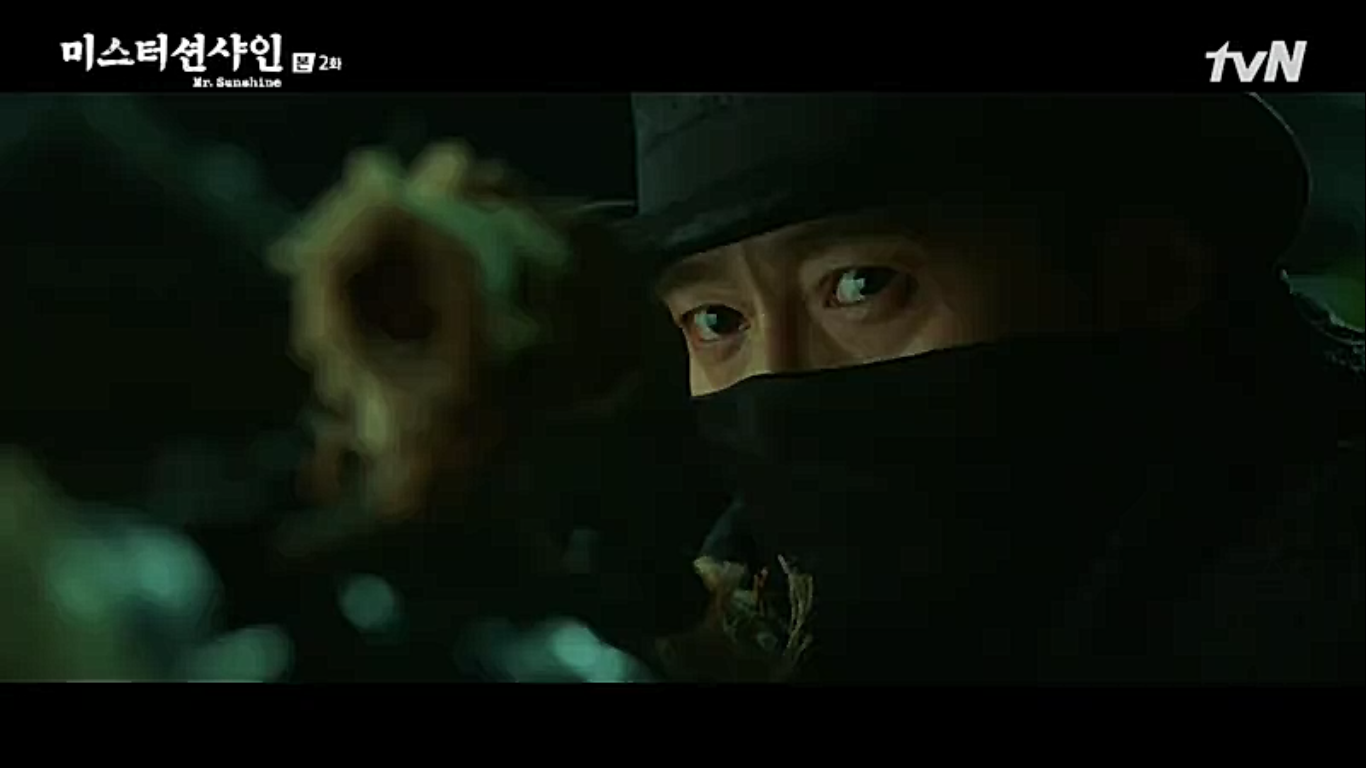 Mr. Sunshine takes place at a turbulent time in Korea. From 1870 to 1910 was a busy time in Korea and the changes were not light. So far Mr. Sunshine has shown so much of the history in an interesting, almost in a down-low way. 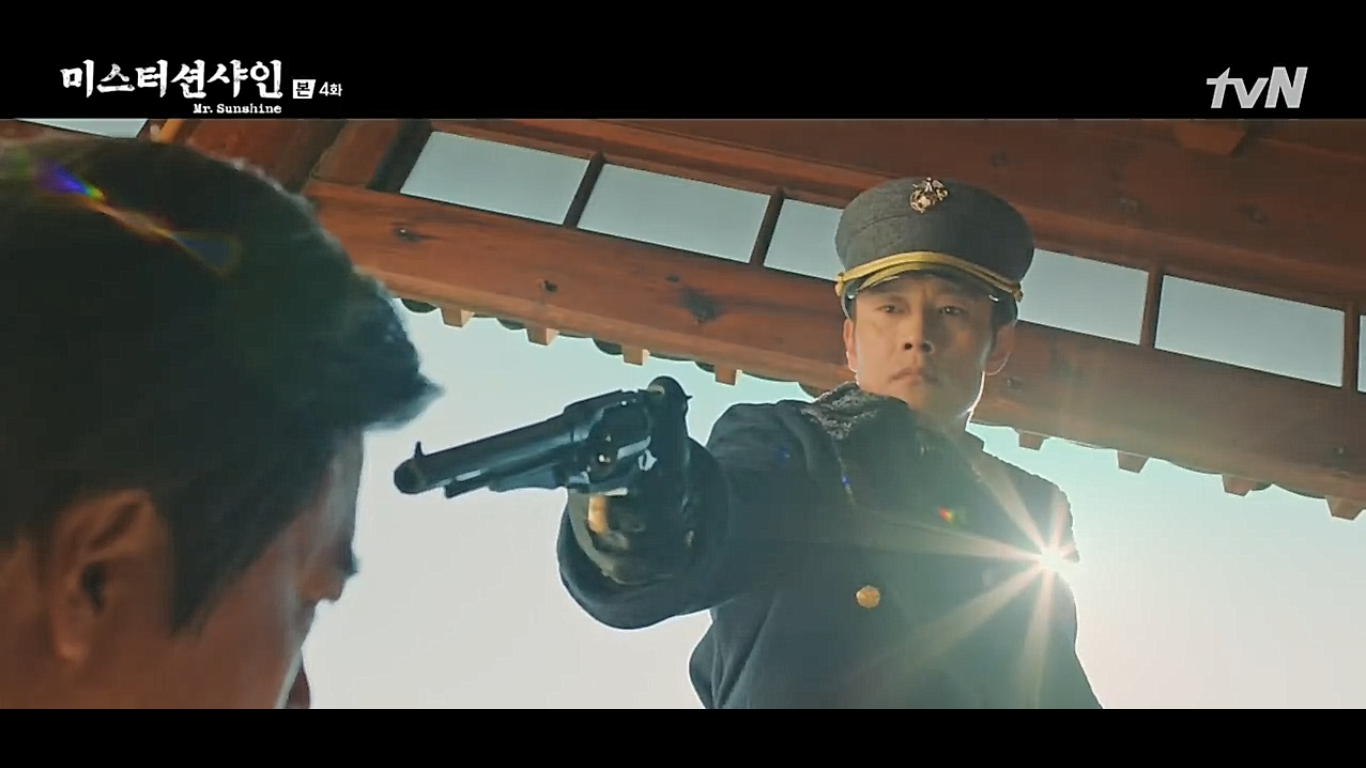 The attires, scenery and language create a mixing pot feeling: with Japanese, American and traditional Korean blended together Mr. Sunshine is a thrilling ride. 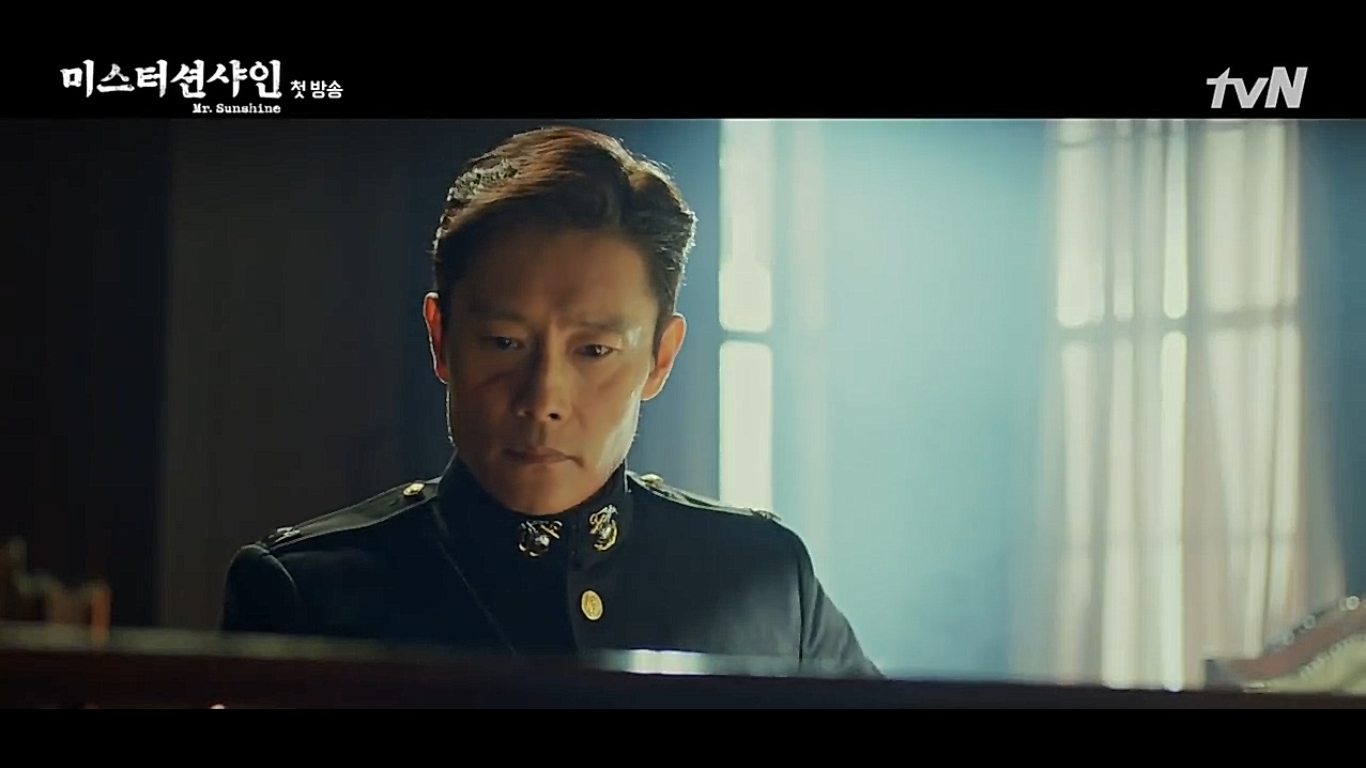 The quote from Ae Sin in the beginning of this article describes this drama perfectly: everyone is trying to live during a time when everything is changing in the matter of days. Mr. Sunshine takes full advantage of its setting and characters and makes a truly captivating drama.

Other History Bits for Mr. Sunshine: